The Future of Sequoia PGP

NLnet recently held a webinar on the future of OpenPGP. The Sequoia team made five short presentations. In addition to an introduction summarizing the past, present, and future of Sequoia, we presented four of our current projects, which provide a nice cross section of our current work.

On November 23rd, NLnet hosted a webinar on the future of OpenPGP. There were eight presentations, including five from the Sequoia team:

A complete recording of the webinar including an introduction to NGI Assure, the eight presentations, and the Q&A session is available on conf.tube. The following embedded video is a shorter version, which we’ve edited to only include the five Sequoia-related presentations, and has subtitles. For those who prefer prose to a presentation, this blog post summarizes the presentations' main points. 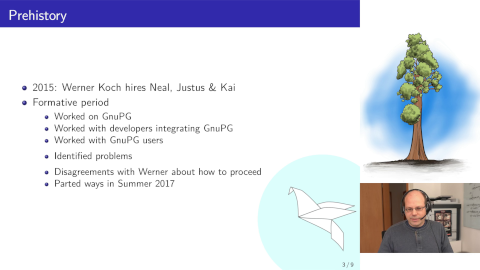 I, Neal, started off the round of presentations. I talked about the history of Sequoia, and how the p≡p foundation helped Justus, Kai and I found the project in 2017, and continues to be our home and main financial supporter. I presented our goals, what we’ve done over the past 4 and a half years, what we’re working on now, and our vision for the future.

The short version of my talk is: we’re not just writing a new OpenPGP implementation. We’re trying to improve the whole internet freedom tooling ecosystem. We’re focusing on OpenPGP, because we think that it provides a great decentralized PKI, and simple, yet powerful authentication mechanisms both of which are essential to strong end-to-end encrypted communication, but are largely ignored by state of the art end-to-end encryption solutions. And the good thing about those mechanisms is that they can be used not only to authenticate OpenPGP messages, but also by ssh to authenticate clients and servers, Matrix to authentication conversation partners, age to authenticate recipients, etc. It’s true that OpenPGP’s web of trust is hard to use today, but we think new and improved tooling like OpenPGP CA will make the web of trust practical for many users, especially those at risk.

Wiktor then talked about his work on adding TPM support to Sequoia. A TPM (Trusted Platform Module) is a coprocessor, which holds cryptographic keys, and provides an API to the host to sign and decrypt data. The advantage of using a TPM instead of storing private key material on the file system is that an attacker cannot ex-filtrate the private key material. This makes TPMs similar to smart cards, like the Nitrokey and other OpenPGP cards. The crucial difference is that with a TPM there is nothing else to buy: TPMs are included in nearly all consumer laptops that are sold today.

In addition to supporting signing and decryption, Wiktor is also working on secure key migration. The problem that key migration solves is how to transfer a private key from a secure place like an offline air gapped system through an online system such as an internet-connected laptop to the secure chip. The TPM specification achieves this through the use of a storage key that is used to wrap the private keys in such a way that they can only be decrypted inside the TPM.

Lars presented his work on improving sq, our command line tool. sq uses a subcommand-style interface, similar to CVS and git, which, we and others think, makes it easier to use.

Lars' project consists of three parts. First, he is adding missing and useful functionality to sq. To identify what we should add, he’s surveying gpg’s functionality, and he’s interviewing stakeholders. The goal is not to implement every feature that GnuPG has, but to support the features that people actually need on a day-to-day basis, and handle esoteric use cases by deferring to the library.

Because programmatic use of sq is going to happen whether we want it to or not (we’d rather developers use our library), the second part of Lars' project is to add a programmatic interface to sq. sq is already designed to be RESTful in the sense that commands are sessionless and don’t require the user to navigate a state machine. The focus of this effort is to add an alternative output format, which doesn’t require programs to parse sq’s output in an ad-hoc manner. For this, we decided to use JSON due to its broad support by basically every programming language. After we add JSON support, we can easily add other formats, like Emacs' s-expressions. Here’s the basic idea:

Finally, to determine if sq actually does what we claim it does, and what stakeholders want it to do, Lars is going to add an acceptance test suite using Subplot.

If an end user wants to use Sequoia today, they can use sq. But if they want to use Sequoia as part of their normal workflow, they will have to wait until the programs they use are ported to Sequoia or there is some replacement that uses Sequoia. Even assuming maintainers would be open to porting their programs to Sequoia, porting hundreds of programs that use OpenPGP would be a Herculean effort. But, more importantly, it would actually contradict one of our goals: interoperability. Instead, we have decided to treat GnuPG, the dominant OpenPGP implementation on the desktop, as a standard API like POSIX and reimplement gpg in terms of Sequoia. Then, users can simply replace gpg with our chameleon and all programs that use gpg will magically start using Sequoia.

We are not aiming for bug compatibility. Justus will implement standard operations like signing, signature verification, encryption, decryption, and key management; provide the human-readable interface; provide the machine-readable interfaces; read configuration files; parse keyrings and keyboxes; use gpg-agent; read trust anchors from trustdb.gpg; and query keyservers and WKDs. But, we will not support translations of command-line arguments; we will use our own web of trust implementation, and not update trust.db; and, we will not support esoteric features like server mode.

To test interoperability, Justus is implementing a black box, bi-simulation approach where we treat gpg as an oracle and compare a normalized version of gpg’s output with the chameleon’s output. Initially, we had hoped to use existing test suites, but we’ve since learned that most tests are too coarse. They simply check for success or failure rather than for specific behavior. This approach is more robust.

Heiko presented OpenPGP CA, which is both a paradigm for how to use OpenPGP in groups and organizations, and tooling to implement this paradigm. OpenPGP CA’s main objective is to move away from TOFU and YOLO authentication and make strong authentication (being sure that you’re using “the right key”) easier.

When using PGP or Signal, it’s up to the user to figure out if they have the right key for each correspondent by checking if they have the right fingerprint or safety number. This doesn’t scale. Our proposition is that in many cases it is better for Alice to rely on a third party to perform most authentication work on her behalf. Ideally, that third party is aligned with Alice’s interests. Oftentimes in organizations, you already have an IT department that performs security relevant tasks for users. If Alice trusts the IT department to install updates on her machine, for instance, she can also trust them to perform authentication work on her behalf. The basic idea is shown in the following diagram: 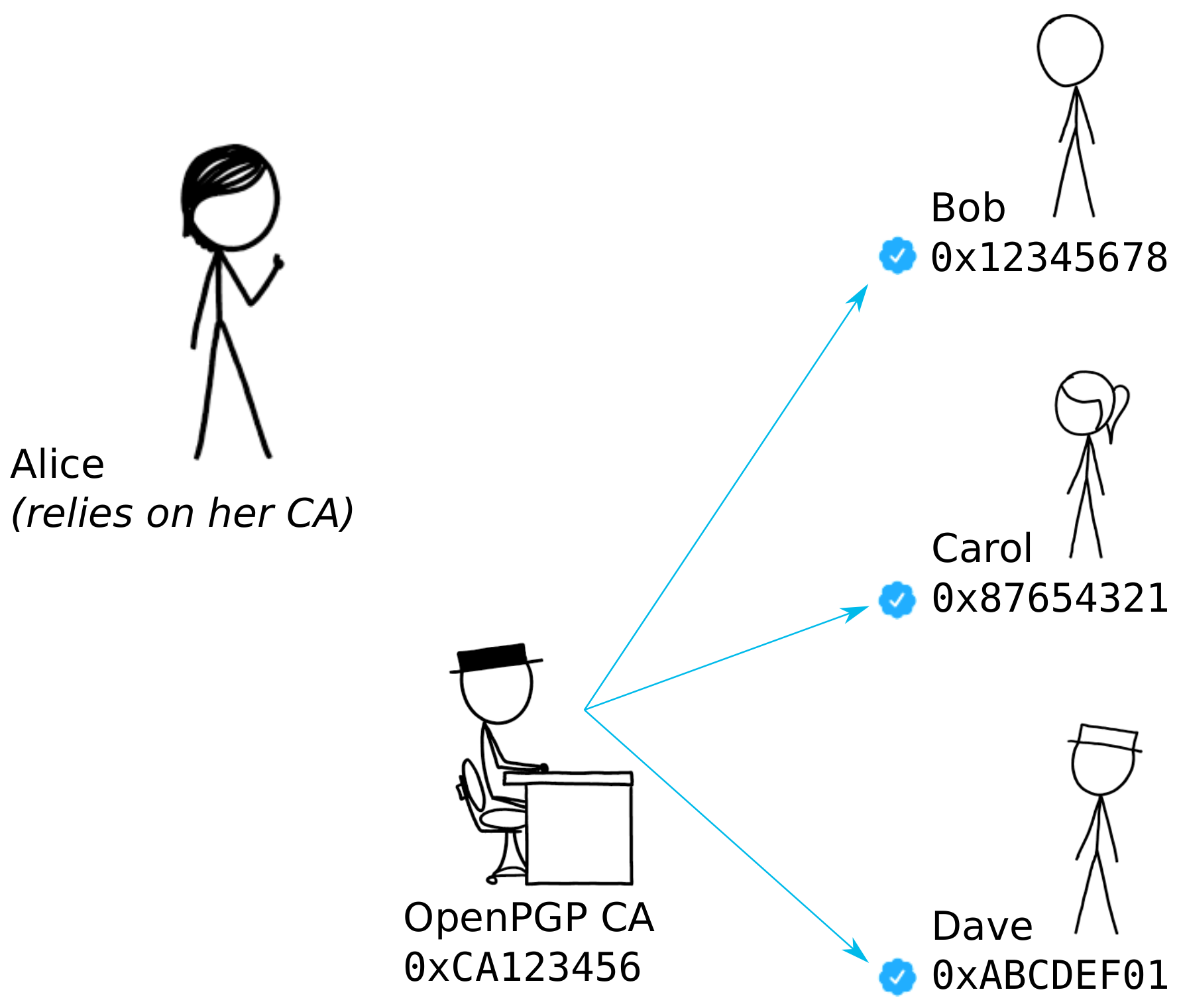 Figure: If Alice is willing to rely on her organization's OpenPGP CA admin, then she doesn't need to manually check the fingerprints of her coworkers. (Stick figures from xkcd (CC BY-NC 2.5).)

Thanks to OpenPGP’s powerful mechanisms, it is even possible for an outsider to safely use the organization’s CA. In OpenPGP, it is possible to only rely on a CA for User IDs from a certain domain. For example, if I sometimes want to talk to Eve at the NSA, I can trust the NSA’s CA to certify users in their organization, even if I’m a journalist who suspects that the organization has an adversarial stance towards me. In this situation, the NSA CA could only mislead me about members of their organization, and not mislead me about the identities of any of my other communication partners.

OpenPGP CA’s model is different from the web’s PKI where users are basically forced to use 100s of untrustworthy global CAs. And, it’s different from TOFU, or just hoping for the best without actually checking anything, i.e. YOLO. OpenPGP CA strikes a new balance.

Since the start of the project four and a half years ago, the p≡p foundation financially supports the six people who work on Sequoia. Thanks to the NLnet foundation, we’ve received grants to work on the four projects presented here.

We are actively looking for additional financial support to diversify our funding.

You don’t need to directly use Sequoia to be positively impacted by it. We’re focused on creating tools for activists, lawyers, and journalists who can’t rely on centralized authentication solutions. So, consider donating. Of course, if your company is using Sequoia, consider sponsoring a developer (or two). Note: if you want to use Sequoia under a license other than the LGPLv2+, please contact the foundation.

This work is licensed under a Creative Commons Attribution 4.0 International License.

Template by Bootstrapious. Ported to Hugo by DevCows.
Images by Ingo Kleiber, and Robert Anders.